“The United States Congress must do everything it can to prevent the Trump Administration’s attempts to put us on the brink of a catastrophic and unconstitutional war with Iran.”

Bernie views Iran as a major player in the Middle East and believes that diplomatic relations between Iran and the West are crucial for both regional stability and the long term security of the U.S. and its allies. Furthermore, Bernie believes that Iranian nuclear ambitions must be held in check and the best way to accomplish this is through clearly defined restrictions verified by international observers.

Nuclear-Free Iran: The U.S., and other international observers, must hold Iran accountable for its nuclear program and prevent it from expanding.

Diplomacy: Diplomatic relations, even with adversarial countries, are integral to long-term peace and security.

Keeping the Iranian nuclear program in check with international observers is greatly preferable to the lack of oversight that has been the status quo. Imposing sanctions without a diplomatic agreement escalates tensions and risks military conflict with Iran.

Without a nuclear deal, Iran can continue to rapidly develop its nuclear program with few checks in place.

From 2007 to 2013, Iran exponentially increased its uranium holdings and the number of centrifuges that were operating to refine that uranium. Highly refined uranium can be used to create nuclear material that could be used in a nuclear weapon. Bernie views a nuclear-armed Iran as a threat and supported the internationally negotiated nuclear deal that was brokered to reduce Iran’s nuclear capabilities.

What is Bernie’s number one priority when it comes to Iran?

Bernie’s top priority in Iran is to prevent them from obtaining a nuclear weapon without engaging in another military conflict with U.S. troops on the ground.

In April of 2015, Bernie stated: “It is imperative that Iran not get a nuclear weapon.” That is why Bernie supports a nuclear deal with Iran.

“I applaud the President … trying to reach out an agreement with the P5+1 in Iran, to try to figure out how we can prevent Iran from getting a nuclear weapon, which to me is an absolute imperative, but you do it in a way that doesn’t go to war.”

What else has Bernie said about the Iran Nuclear Agreement?

Bernie approved of the the Joint Comprehensive Plan of Action, otherwise known as the Iran Nuclear Agreement that set up a comprehensive monitoring, compliance, and inspection program to keep close tabs on Iran’s nuclear program. Bernie said, “What the president has tried to do is to make it certain that we have a verifiable agreement that prevents Iran from getting a nuclear weapon.” Bernie hailed the Iran nuclear deal as a victory “for diplomacy over saber-rattling.”

As the agreement was being negotiated Bernie said:

“[A]t this point, harsher sanctions won’t stop Iran’s nuclear program. Neither would a dangerous resort to military action. The sanctions currently in place have brought Iran to the bargaining table and current negotiations resulted in Iran freezing its nuclear program. And for the past year, Iran has been subject to heightened international inspections. All of those things have made us safer.”

When it was signed Bernie praised the agreement with Iran by saying:

“I congratulate President Obama, Secretary Kerry and the leaders of other major nations for producing a comprehensive agreement to prevent Iran from obtaining a nuclear weapon. This is a victory for diplomacy over saber-rattling and could keep the United States from being drawn into another never-ending war in the Middle East.”

When the United States withdrew from the JCPOA agreement in 2018, Bernie said “the American people do not want to be engaged in never-ending wars in the Middle East. I am deeply concerned that that is exactly where President Trump is taking us with regard to Iran. And for anyone who tries to dismiss those concerns, I would remind you that his newly installed National Security Adviser John Bolton wrote an article a few years ago entitled ‘To Stop Iran’s Bomb, Bomb Iran.’ Now Donald Trump seems to be creating his own excuse for doing exactly that.”

Bernie has expressed concern that the U.S. withdrawal will foster distrust and make negotiation of future agreements nearly impossible. Bernie thinks withdrawal from the agreement is a dangerous act.

But some said that the Iran Deal paved Iran’s way to get a nuclear weapon bomb. What was actually in it?

Far from paving the way for a nuclear bomb, the Iran nuclear deal would have greatly reduced Iran’s nuclear stockpile and facilities, and increased the amount of time it would take for Iran to create a nuclear weapon if the agreement fell apart. While the nuclear deal with Iran was a comprehensive and lengthy agreement, below are a few key components of the deal to clear up any confusion:

More details in the below infographic:

So Bernie believes we must prevent Iran from getting a nuclear weapon. What does he think about nuclear disarmament in general?

Bernie has stated unequivocally the we must limit nuclear proliferation and work towards a safer world free of nuclear weapons:

“I strongly agree with President Obama’s call for ‘a world without nuclear weapons.’  As has been made apparent by recent provocative actions by North Korea and Iran, the threat of nuclear weapons is a present threat to the security of America and the world.  We must limit nuclear proliferation, now and in the future. We must end the production of weapons-grade uranium. And we must heed what President Obama has called our ‘moral responsibility’ to lead the way toward reducing, and eventually eliminating, nuclear weapons.”

It is with this vision in mind that Bernie supported the Iran nuclear pact and condemned the U.S. unilateral withdraw from it.

Similarly, Bernie has been working to reduce nuclear weapons stockpiles around the world. In 2015, Bernie co-sponsored the Smarter Approach to Nuclear Expenditures Act, which would reduce the nuclear weapons budget by $100 billion over the next ten years.

What’s the current state of the Iran Deal?

President Donald Trump withdrew from Iran Deal on May 8, 2018, even as Joint Chiefs Chairman General Joseph Dunford and Secretary Of Defense James Mattis urged him not to.

Would Bernie rejoin the Iran Deal if elected President?

Yes, Bernie has said that he would rejoin the Iran Deal if elected President of the United States.

Bernie wants to a new approach to American foreign policy. He stands with the majority of Americans in supporting diplomacy as the best method to find solutions to international disputes, including Iran’s nuclear threat. He sees military action as the least favorable approach, noting it’s “imperative that we do everything we can to reach a diplomatic solution and avoid never-ending war in the Middle East.”

Most Americans agree that diplomacy is the best way to curtail Iran’s nuclear ambitions: 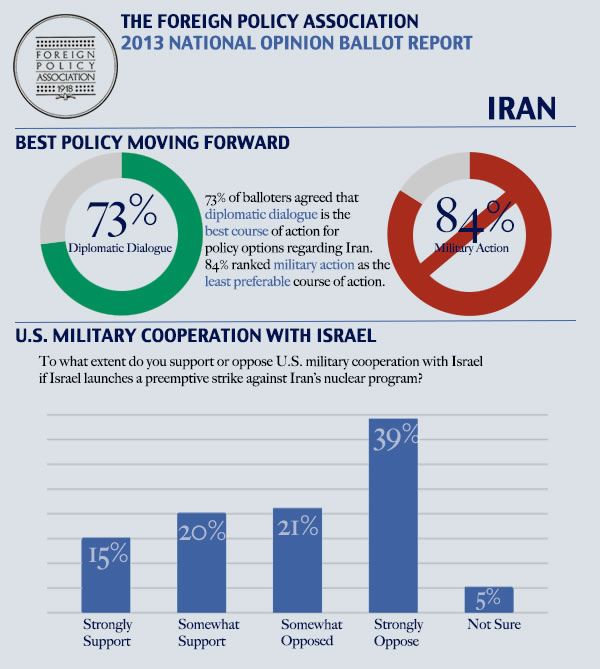 Why should we approach international conflicts through diplomacy?

In addition, Bernie agreed with the majority of Americans who largely viewed military action as an undesirable response to Iran’s nuclear program.

Bernie agrees with the American people, and the security experts and diplomats who endorsed the deal. Bernie believes that using military force in Iran is the “very last option”.

Even when dealing with hostile nations, diplomatic relations are important. Even at the height of the Cold War, the U.S. held talks and signed treaties with the U.S.S.R. Despite the U.S.S.R. being openly hostile to the U.S., we were able to temper those hostilities by signing agreements including the Anti-Ballistic Missile Treaty (ABMT) and Strategic Arms Limitations Talk (SALT), which limited nuclear armaments, increasing the security of both nations.

Beyond the nuclear issue, how else has Bernie engaged with Iran?

The Supreme Leader of Iran, Ayatollah Khamenei, stated that “anyone who dies in this holy struggle against World Zionism” would be given the status as a martyr. In response, Bernie joined as a co-sponsor Senate Concurrent Resolution 11, denouncing the anti-Semitic rhetoric of the Iranian government.

What has Bernie said about how Trump has dealt with Iran?

Bernie forcefully warned the Trump administration against embroiling the United States in a costly and unnecessary war with Iran.“Let me be as clear as I can be: a war with Iran would be an absolute disaster,” said Bernie.

He further warned that any military action without Congressional approval would be an “unconstitutional and illegal” breach of office. In his speech, Bernie reminded us that “Sixteen years ago, the United States committed one of the worst foreign policy blunders in the history of our country by attacking Iraq. That war was sold to the American people based on a series of lies about weapons of mass destruction. We should remember that one of the leading advocates for that war was John Bolton.”

How would Bernie Sanders approach foreign policy as President?

In an interview with NPR, Bernie said that the goal of U.S. foreign policy “should be global engagement based on partnership, rather than dominance. This is better for our security, better for global stability and better for facilitating the international cooperation necessary to meet shared challenges.”

Bernie believes that Presidential power to declare war is too broad. It is used by Presidents to enter foreign conflicts that Congress has never authorized. In line with this thinking, he introduced a Senate resolution invoking the limitations set forth in the War Powers Act of 1973 to remove U.S. troops that are fighting Saudi Arabia’s military campaign in Yemen.

Conflict Between Iran and Saudi Arabia

Bernie believes that the U.S. position in the regional conflict between Saudi Arabia and Iran should be rebalanced. As President, Bernie imagines the U.S. taking a more neutral role in the rivalry between Iran and Saudi Arabia. Bernie explained that there is:

“a bipartisan assumption that we’re supposed to love Saudi Arabia and hate Iran. And yet, if you look at young people in Iran, they are probably a lot more pro-American than Saudis. Iran is a very flawed society, no debate about it. Involved in terrorism, doing a lot of bad things. But they also have more democracy, as a matter of fact, more women’s rights, than does Saudi Arabia. [America needs] to say, you know what? We’re not going to be spending trillions of dollars and losing American lives because of your long-standing hostilities.”