Greece is currently in the midst of a severe depression. It has been in financial turmoil since 2008 and hasn’t been able to fulfill the terms of the 2010 bailouts it received from the European Troika, a committee composed of the International Monetary Fund (IMF), the European Central Bank, and the European Commission.

Over the past year, the leftist Syriza party gained power by promising to renegotiate these terms, which require severe spending cuts and other austerity measures. The party’s leader and now Greece’s prime minister, Alexis Tsipras said that austerity had led to a “humanitarian crisis” in Greece. As the Troika grows impatient over Greece’s financial instability, they tighten their grip by proposing more severe austerity measures, which Greece continues to reject.

Bernie stands in solidarity with Greece in rejecting the austerity measures.

The Troika: Greece’s creditors need to work with the Greek government and people to help create a pro-growth policy.

Political Consequences: Greece’s financial instability doesn’t only have economic consequences, but socio-political ones as well. These should be considered when addressing solutions to the financial crisis.

Bernie supports the people of Greece in rejecting the increasingly constricting austerity measures proposed by its creditors. He’s written letters to the managing director of the IMF and U.S. Federal Reserve encouraging these organizations to ease the Troika’s demands:

“In a world of massive wealth and income inequality, Europe must support Greece’s efforts to build an economy which creates more jobs and income, not more unemployment and suffering.”

How bad is the situation in Greece?

The situation in Greece is comparable, if not worse than, the Great Depression. 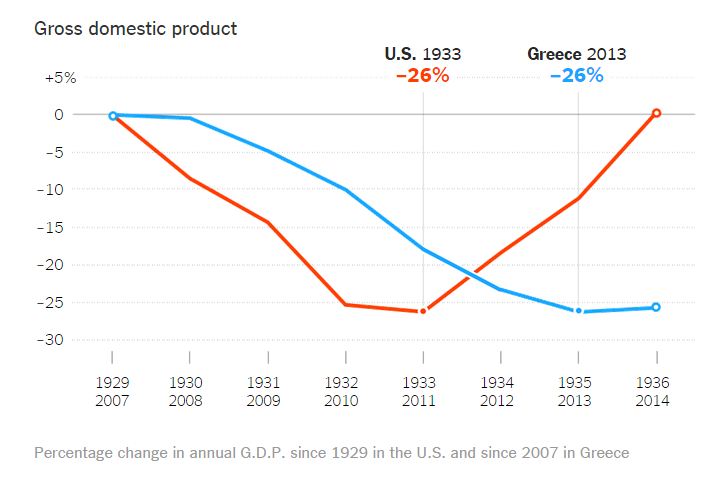 Greece situation vs. Great Depression from the New York Times.

The crisis in Greece, however, is far more than just numbers on a chart. Indeed, the crisis has an enormous impact on daily lives of the people of Greece. From a letter he wrote to the managing director of the IMF managing, Bernie states:

“The cost of austerity in humanitarian terms are clear. 1 in 4 workers are unemployed, and the health system has been cut by 40 percent. Homelessness has spiked by a quarter and HIV cases have increased by 200 percent. Hospitals are missing basic equipment such as surgical gloves, and pharmacies are running our of medicines. Malaria, once under control, is returning because Greek cities can not pay for mosquito spray.”

How did the situation in Greece get so bad?

After Wall Street imploded in 2008, Greece took a hard hit in Europe’s ensuing crisis. Since then, Greece has borrowed money from the Troika, under strict austerity terms that were meant to incentivize more careful spending and borrowing. The €240 billion bailout was given to under the condition that Greece would enact deep budget cuts and steep tax hikes.

When Greece could not manage to pay back all their debt while at the same time revitalizing their economy, the Troika tightened their grip by proposing harsher austerity measures in exchange for keeping them afloat. Greece, under the leadership of Tsipras, rejected the measures proposed in early July 2015, but has begrudgingly accepted the most recent proposal on July 16.

Why should America care about Greece?

A key worry is that if Greece were to leave the Eurozone because of its debt, it would start an irreversible domino effect throughout the European Union. Countries like Ireland and Portugal, previous recipients of similar bailout money, could be dragged back into an economic crisis. Another concern is that a U.S.-hostile Russia may exert a greater influence on Europe, because some speculate that if Greece left the Eurozone, it may seek Russian aid.

Americans might also care on moral grounds. In Bernie’s words:

What has Bernie said about this situation?

He supported Greece rejecting the austerity measure in early July 2015. Bernie has been adamant for months about giving Greece a chance to work on getting their economy back up with their new prime minister. Speaking on Closing Bell, Bernie said the following:

“I happen to think that it is absolutely imperative that the ECB, that the Troika in Europe, work with the Greek government, not in an austerity program which punishes people who are already suffering, but in a pro-growth policy which enables them to create jobs, expand their economy, and pay off their debts.”

What actions has Bernie taken?

Bernie has sent a letter to Federal Reserve Chair Janet Yellen, asking her to provide assurances that American lending policies will not exacerbate the Greek crisis. Further, Bernie sent a letter to the IMF stating:

“As ranking member of the Budget Committee, I am concerned about the IMF using U.S. government resources to impose austerity on a people that cannot take any more of it and risking financial contagion and political instability in doing so. I also believe that with the right leadership and choices, the IMF can help resolve this painful situation in a way that recognizes reasonable losses to creditors, while aiding the Greek government in reducing tax evasion and corruption.”

The crisis in Greece is not isolated to economics alone. There are serious potential political ramifications too.

Why might failure to help Greece have political consequences?

Bernie believes that the harsh austerity imposed on Greece could result in government upheaval, similar to how the post-World War I Treaty of Versailles that ultimately led to the rise of Nazi Germany:

“It would be a terrible mistake for the world to forget what happens when a democratically-elected government, as was the case in Germany in the 1920s, is unable to relieve the severe economic suffering of its people. We must remember that waiting in the wings, should this recently elected Greek government fail, is the neo-Nazi party Golden Dawn party. We cannot allow fascism to come to power in a European country due to our unwillingness to reverse harmful austerity policies.”

In fact, the neo-Nazi, fascist Golden Dawn party is surging in Greece. While they’d attracted only 0.5 percent of the vote a few years ago, it is now the third-largest party in the Greek parliament today, having earned 7 percent of the electorate’s vote.

“We should understand that when democracy fails and people cannot get what they voted for because of outside forces it leads to contempt for democracy and people vote for parties like Golden Dawn.”

Learn more about Bernie’s stance from economist Costas Panayotakis in this video: