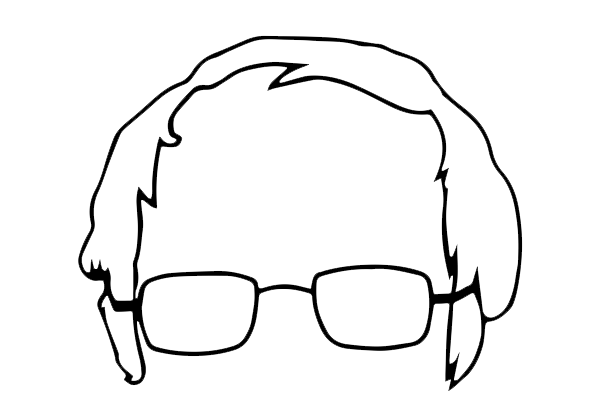 Reminder: Don’t forget to send out your My Bernie Story to your friends, family and network today!

Why do you support Bernie Sanders, and why should your family support him too?

While Bernie holds strong to his values and beliefs, he knows that government works when people across the aisle come together. Bernie is a legislative giant. He has introduced or co-sponsored over 7,400 bills and amendments. He’s known as the Amendment King because he has a strong record of getting bills and amendments passed even in a gridlocked Congress. In such a corrupt system, Bernie Sanders is incorruptible, his career long consistency shows that he says what he thinks and does what he says.

Tuesday – Why Medicare for All?

Bernie believes access to medical care is a right not a privilege. If someone needs medical care they should be able to get it. No one should be afraid to see a doctor because they can’t afford to.

Why is Medicare for All necessary? Why not expand the Affordable Care Act and create a public option?

Our current system is a combination of employer-based insurance and private insurance – where profits rise as coverage decreases and claims are denied. Despite the promise that healthcare would become more affordable, that hasn’t happened. The Affordable Care Act, which made private insurance more accessible to more people, was a small victory, but healthcare and prescription drug costs have continued to soar — along with insurance company and pharmaceutical company profits.

Premiums, deductibles, and out-of-pocket costs are far too high, and getting higher. Millions of Americans remain uninsured and underinsured. And not only is the coverage expensive, it’s inadequate. Most people must pay out-of-pocket for dental, vision, and hearing.  And people are fully aware that the healthcare system is broken. 70% of Americans, including a majority of Republicans, now support Medicare For All.

What is Bernie’s healthcare plan?

Bernie believes that health care is a human right and the best way to ensure everyone is covered is a universal single-payer system, Medicare for All. Medicare already successfully delivers healthcare coverage for those over 65, nearly 15% of the U.S. population, around 44 million people. Medicare for All would expand coverage, remove the profit motive, increase healthcare efficiency and make sure every single American is taken care of.

This is how Medicare for All will be phased in:

This is how Medicare for All will be paid for while reducing the overall cost of healthcare:

This is how Medicare for All will change the current healthcare system and expand coverage:

What will it cost?

Bernie’s plan is projected to cost $33 trillion over 10 years while expanding coverage and including everyone.

Last year total healthcare spending in the United States was $3.5 trillion. If we change nothing in this dysfunctional system the Centers for Medicare and Medicaid Services projects that healthcare in the U.S will cost at least $38 trillion over 10 years.

In 2018, the average health insurance costs for a family of four was $28,166. That cost increases $100 each month. Medicare for All will save most families $2000—$4000 per year. This volunteer created tax calculator will give you an idea of how Bernie’s plans will affect you.

What are the ​expected savings?

Medicare for All will drive down healthcare costs by using a schedule of payments for healthcare services like we already do for Medicare. There will be:

Mercatus, a Koch-funded think-tank, conducted a study and found that Medicare For All would save $2 trillion over a ten-year period. The University of Massachusetts Political Economy Research Institute (PERI) projected that the savings over the same period of time would be approximately $5 trillion.

What are other benefits of Medicare for All?

Medicare for All will end the necessity for private health insurance because every citizen would be covered under a single payer system. And, it would save a lot of money – for workers, employers and the government. We can drastically reduce health care and prescription costs, we can cover more people, and we can make the coverage comprehensive. It’s a win-win.

What’s the problem with Money in Politics?

According to a Princeton University study, our government no longer represents regular people. In fact, “the preferences of the average American appear to have only a minuscule, near-zero, statistically non-significant impact upon public policy.” Former President Jimmy Carter stated during an interview in July 2015 that “the billionaire class now owns the economy, and they are working day and night to make certain that they own the United States government.” For decades Bernie has been fighting to make our democracy for the people by the people, not for the wealthy by the wealthy. And most Americans agree with Bernie that corporate money in politics needs to be limited so big donors can’t manipulate and buy our elections, control our elected officials and dictate our political discourse.

This video with Robert Reich does a good job explaining the issue.

Bernie’s platform includes a detailed plan to Get Corporate Money Out of Politics: Here’s what his plan will do:

Get corporate money out of our elections

End corporate influence at the DNC

End corporate influence at the inauguration

Change the way we finance our elections

Stop the bribery of elected officials by corporations and lobbyists

Bernie Sanders refuses to be bought. He continues to show that he is a man of the people, not the billionaires. Bernie refuses support from Super PACs. He believes it’s time to end the corruption of millionaires spending millions of dollars to buy elections and candidates who will do their bidding.

Thursday – How to talk to Democrats & Republicans

Personal conversations with people who know and trust you are by far the best way to bring people on the fence about Bernie to supporting Bernie.  And the best kind of conversations to make that happen center around personal story-telling that explain your motivations with empathy and understanding.

The approach is simple: tell your story, listen, be authentic, and talk about the direct consequences of Bernie’s policies on real people for you and the person you’re talking to.  Make is clear that no one needs to struggle alone, we can and should confront these issues as part of this movement. We are in this together.

Let’s discuss how to talk to your Republican and Democrat friends and family alike. Just remember:

Tell Your My Bernie Story: Tell your story about why you believe in Bernie and what convinced you to support him. This is one of the most powerful ways to help people Feel the Bern like you and decide to join our movement. By explaining your motivations you create the opportunity for others to relate to your experience and possibly change their mind.

Listen: It’s extremely important to understand where the person you’re talking to is coming from. Maybe he or she has a real-life experience with an issue, or will never budge on certain stances. It’s essential to listen before trying to explain. Listen to what that person likes, which candidate he or she is interested in, and why he or she dislikes or distrusts Bernie. Try to meet people where they are and listen, offering Bernie’s positions as solutions to the issues people care about and are focused on.

Don’t Argue: This is supposed to be a discussion. Arguing doesn’t persuade. More often than not people leave a debate unpersuaded and holding onto their own position. People want to feel heard, sincerely listened to, and understood, not berated or judged. Some people like to argue for the sake of arguing or use talking points from their favorite media outlets.  That is not effective in convincing someone to support Bernie. Ask yourself: is there a legitimate disagreement being proposed, or are we talking past each other? Sometimes it’s best to just let it go.

Empathize: The person you’re discussing politics with is likely to be just as convinced of his or her views as you are. Don’t cut down an argument based on word choices or fallacies; instead, try to see it as an expression of the speaker’s beliefs and values. Allowing ourselves to be vulnerable helps us connect with people so they may be open to reconsidering their attitude toward Bernie and his progressive ideas. Try to find a connection to the person’s beliefs and Bernie’s policies.

Ask, Don’t Tell: One of the best ways to inform people about something you’re passionate about is to lead them to the issue rather than dragging it to them. Touting Bernie’s strongest policies won’t help if the person you’re talking to doesn’t care about that issue. When discussing policy always ask “Why?” What makes you think that? What would you like to hear more about? Let people come to their own conclusions.

Accept That Some People Will Never Vote for Bernie: There’s no point in arguing with, berating, guilting, or imploring people to change their minds. Taking disagreements as personal insults or lashing out with “you’re wrong and here’s why” won’t help. And refusing to just let it go will give Bernie’s detractors more reasons to oppose you, and may alienate those who are undecided. There are a lot of voters out there. Bernie is not the right fit for everyone.

Some old adages are truer than others like: You catch more flies with honey than vinegar. Passion without pretension is a strong strategy to convince people that Bernie’s policies are good, and that though we may disagree, we can have a friendly and issues-based discussion. When we have these discussions in a personal and respectful way, on-the-fence voters and even detractors, will see that Bernie and his supporters truly have the public’s best interests in mind. Some may even start to Feel the Bern.

Helpful and fun links: Feelthebern.org | BernieFacts | Bernie Shares Advice on How to Avoid Political Arguments With Family on Thanksgiving | http://www.yourrepublicanuncle.com/ | The Key to Political Persuasion (NYT) | Mr. Rogers and the Power of Persuasion