America has an outdated rail system and has fallen far behind other industrialized countries. A 2019 report estimates it will take more than 80 years to fix all 47,000 of the nation’s structurally deficient bridges, some of which could collapse. Our roads aren’t adequately maintained, have too much traffic, and are becoming more dangerous. Airports are increasingly unable to meet the needs of the $2.5 trillion U.S.travel economy. Schools are in poor condition and there is an affordable housing crisis.

Bernie sees rebuilding our nation’s infrastructure as a critical function of government, but also as an opportunity to address the urgent need to transition to a green economy that runs on sustainable energy and creates good paying jobs.

Rebuild America’s Infrastructure: Our roads, bridges, drinking water systems, wastewater plants, rail, schools, and affordable housing have not been maintained, repaired and replaced to keep the nation’s infrastructure safe and operational. Additionally, our infrastructure investments have not kept pace with the growth of our country and have failed to keep up with technological advances and the rest of the world. We have to take action.

Rebuilding Will Provide Jobs: Addressing our infrastructure problems and building a 100% sustainable energy system will create good paying jobs that will contribute to economic growth for families and communities across the country.

Bernie believes we are long overdue to repair and update our country’s infrastructure. Poor infrastructure not only poses a safety threat and risks bridge collapses or dam breaches, but also reduces our quality of life and results in lost productivity.

Any American who deals with potholes, slow internet service, and the unavailability of public transit – among other numerous and regular inconveniences – knows first-hand that poor infrastructure is a serious problem.

What do you mean by infrastructure?

The most identifiable piece of American infrastructure is the Interstate Highway System which started to be built in 1956. The fiber optic cables for the internet and utility lines for phone, electricity and water, run along these highways on public rights of way.

Is our infrastructure really “crumbling”?

Yes, it is. In its annual report card on the nation’s infrastructure, the American Society of Civil Engineers (ASCE) gave the United States a cumulative grade of D+.

Here’s a short video that discusses our infrastructure challenge:

As Bernie has said, “Look, this is kind of a ‘no-brainer.’ Whether you are in the state of Vermont or the state of California, you understand that our infrastructure is crumbling: our roads, our bridges, our water systems, our wastewater plants, our airports, our levies and our dams.”

Here are some statistics:

Recent examples of bridge collapses in California, Washington, Texas, Missouri, and Minnesota only serve to underline the critical nature of this growing problem.

What has Bernie proposed to fix this?

“America once led the world in building and maintaining a nationwide network of safe and reliable bridges and roads. Today, nearly a quarter of the nation’s 600,000 bridges have been designated as structurally deficient or functionally obsolete. Let’s rebuild our crumbling infrastructure. Let’s make our country safer and more efficient. Let’s put millions of Americans back to work.”

The bill called for an investment of $1 trillion over 5 years to rebuild and expand on our country’s infrastructure and to create over 13 million good-paying jobs. It would be paid for by closing corporate income tax loopholes and overseas tax havens.

In 2017, Bernie joined Senate Democrats in supporting the Blueprint to Rebuild America’s Infrastructure plan which also called for a $1 trillion investment in infrastructure.

Investing in infrastructure repairs and upgrades are part of Bernie’s Green New Deal.

Yikes! That’s a lot of money. How can we afford to invest $1 trillion in infrastructure?

In its 2016 economic impact study, the American Civil Society of Engineers (ASCE) found the economic consequences of not investing in infrastructure include: 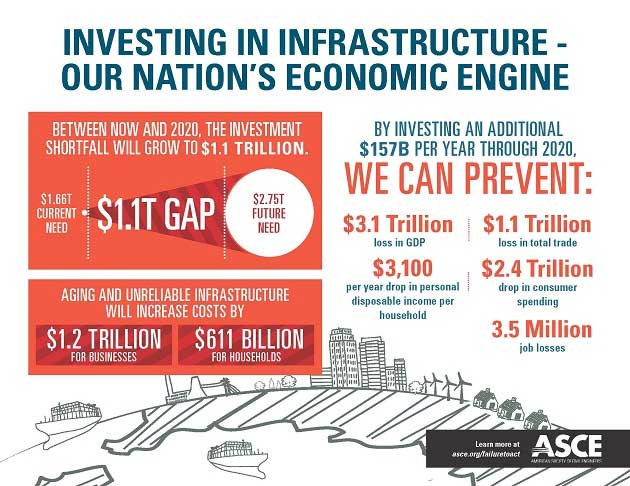 And to be honest, $1 trillion is not enough. The ASCE estimates $4.5 trillion is needed by 2025 to fix the country’s roads, bridges, and other structures

You can look at the condition of the infrastructure of your state here.

It’s clear we need to invest in our infrastructure, but where’s the money coming from?

The most important point to realize is that rebuilding our infrastructure is necessary to keep our country running and is also an investment in our economic future.

One study found that non-residential construction generates $1.92 for each $1 spent in short term economic impact. The long-term impact is even greater — $3.21 for each $1 spent. A separate study found that each dollar spent on infrastructure investments added $3 to GDP growth. Another study estimates that 1.5 million jobs would be created by spending an additional 1 percent of GDP.

We know that large investments in infrastructure can be done. As Bernie has noted, we found a way to pay for the $1.7 trillion cost of the Iraq War, which included rebuilding much of the infrastructure that was destroyed.

In terms of funding a large investment in infrastructure, Bernie has made it clear that the wealthiest Americans, large corporations, and Wall Street must pay their fair share in taxes and he has introduced a number of bills to curb corporate tax dodging which would raise over half of the required revenue. Bernie’s Green New Deal includes further explanation of his plans on how to pay for this fundamental government responsibility.

You can read more on the Corporate Regulations and Federal Budget and Deficit pages.

Bernie believes that the fastest way to create millions of jobs is to rebuild our crumbling infrastructure; he’s been saying so for decades!

When he introduced the Rebuild America Act of 2015, Bernie noted:

“There’s a reason that investing in our infrastructure has traditionally enjoyed bipartisan support in Congress. It’s a good idea. It creates jobs, income, profits and tax revenues. It lays a foundation for the efficient operation of our economy in the future.”

How does investing in infrastructure create jobs?

Fixing our infrastructure would give American workers good-paying jobs, stimulate our economy, and boost our national productivity.

According to a research paper by Standard & Poor, $1.3 billion in infrastructure investment would create about 29,000 construction jobs, and many more jobs indirectly.

Bernie says we need millions of workers to rebuild our crumbling infrastructure.

“A $1 trillion investment would put 13 million people to work repairing the backlog of infrastructure projects all across this country,” he continued. “Moreover, each project would require equipment, supplies and services, and the hard-earned salaries from the jobs created would be spent in countless restaurants, shops and other local businesses. And, all of this economic activity would generate new tax revenues to pay for the services that the American people expect and deserve.”

As Bernie said, not only will new construction jobs be created, these new jobs mean that people will have more money. This results in increased spending, which further stimulates economic growth in other sectors. To meet the increased consumer demand new businesses will form and established businesses will expand and grow, creating even more jobs.

One thing is clear from all of the studies and reports: investing in infrastructure will create much need good paying jobs.