The United States 2018 budget deficit was $779 billion. The deficit is high for three reasons: dramatically increased spending on the military, wars, and Homeland security; reduced revenue from recent tax cuts; and underfunded spending on Medicare, Medicaid, housing assistance, and other income support programs.

Many politicians want to reduce the deficit by cutting back on social programs. Meanwhile, defense spending increases each year. For years, Bernie Sanders has sharply criticized politicians who support such policies – which he considers regressive – as seen here in his fiery 2003 exchange with former Federal Reserve Chairman Alan Greenspan:

Progressive Taxation: Progressive income and estate taxes will raise money for the budget while preventing the creation of an oligarchy and aristocracy.

Corporations and the wealthy must pay their taxes: Middle-class Americans are forced to pay taxes, while the super-rich and corporations enjoy loopholes. That needs to stop.

Reduce the Defense Budget: America spends almost as much on defense as the rest of the world combined. Our defense budget can and should be reduced.

Invest in Infrastructure: Investing in America’s crumbling infrastructure will create millions of jobs and stimulate the economy so there is more tax revenue to fund the federal budget.

As one measure to help reduce income inequality, Bernie has released an Income Inequality Tax plan so corporations will invest in their workers, not just dividends, stock buybacks and outrageous compensation packages to their executives. Another measure Bernie is proposing is an annual Tax on Extreme Wealth for the top 0.1% of Americans – starting at 1% tax for net worth’s above $32 million per married couple and up to 8% on wealth over $10 billion – to reduce inequality and rebuild the middle class.

The only difference Bernie is calling for is raising the rate on the highest tax brackets and eliminating the tax loopholes rich people exploit to avoid paying their fair share.

Bernie wants to increase income taxes on the richest Americans so that they finally pay their fair share of taxes to fund America’s budget. Much of rich people’s income is not earned income from a wage, but rather from investments, which is currently taxed at a comparatively low rate. Bernie wants to tax capital gains and qualified dividends income as ordinary income which would raise at least $265 billion over ten years. 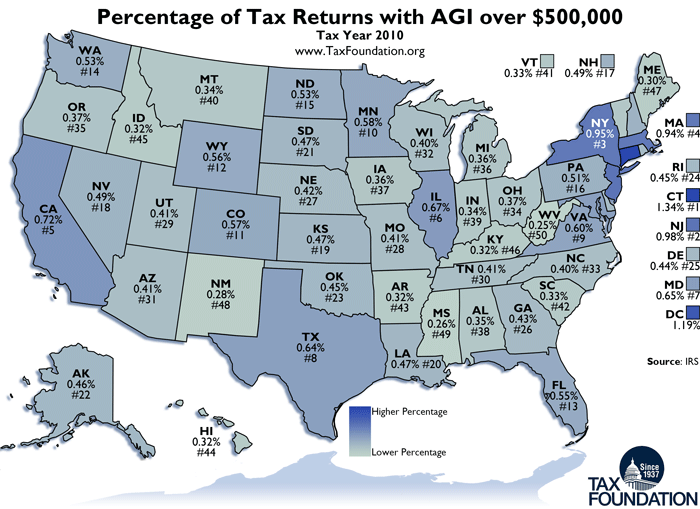 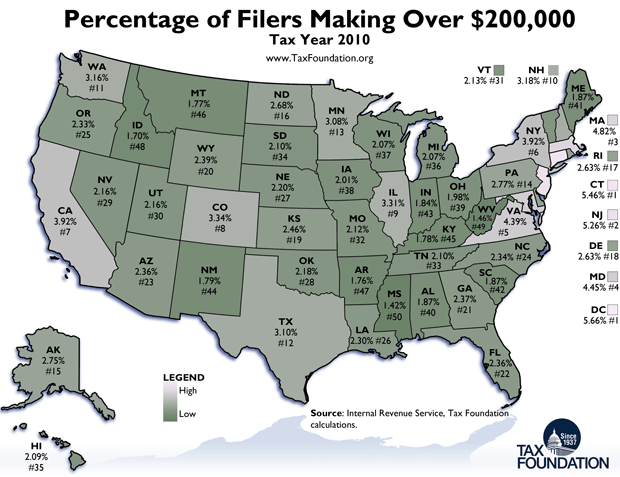 Who are the “richest Americans”?

The richest Americans qualify for the top income tax bracket. Right now, the top tax bracket begins with income over $500,000. Any money earned above $500,000 is taxed at 37 percent.

Does this mean these individuals pay 37 percent of their entire income in taxes?

I heard Bernie wants a 90 percent tax for rich people. Is that true?

No, it’s not true. Bernie has never said he wants to do that. He recently said that he is “working right now on a comprehensive tax package, which I suspect will, for the top marginal rates, go over 50 percent.”

But has it ever been that high?

Actually, yes. The top tax rate was over 90 percent for most years from 1944 until 1964. Today’s income tax rates are strikingly low, especially for higher income brackets.

The estate tax is a tax on someone’s estate, which is all of the money and property owned by a particular person after they pass away.

The estate tax is already progressive.  Small estates aren’t taxed. If your estate is worth over $11 million, then you have to pay federal estate tax.

An estate tax that lowers the amount at which an estate is taxed, also known as the “billionaire tax,” may be the fairest way to begin reducing the federal deficit. Right now, only the very wealthiest millionaires and billionaires pay federal estate taxes.  In 2017, all estates valued under $11.2 million per individual and $22.4 million per couple paid no estate tax.

While this tax used to unfairly affect the estates and farms of many working- and middle-class Americans, it has been significantly changed to only affect large estates — ones that are worth over several millions of dollars. The problem now is that the rate has been lowered and the cap raised to such an extent that it essentially is a huge tax break for the super-rich.

What is Bernie’s answer to reforming the estate tax?

Under Bernie’s plan, 99.75 percent of Americans would not pay a penny more in estate taxes.

How much revenue can raising the estate tax yield?

In 2010, Bernie estimated that increasing the estate tax would raise over $319 billion over ten years. That number would certainly be higher now.

To see a full explanation of Bernie’s tax reform ideas, read the tax section of the Economic Inequality page.

Tax Corporations and the Wealthy Fairly

Despite record breaking profits, the share of the federal budget paid by corporate income tax is down from 33 percent in 1950 to just 9 percent today. Meanwhile, many large corporations have closed American offices and moved headquarters overseas to avoid paying their taxes.

Bernie believes that closing tax loopholes for corporations is absolutely necessary to fix the federal budget. Bernie also wants to expand Wall Street regulation and discourage reckless gambling in the financial sector by instating the Financial Transaction Tax (FTT). Closing loopholes and instating a FTT could raise $590 billion over the next ten years.

For more info on the FTT and closing loopholes, see the Financial Regulation issues page.

What kind of loopholes are being used now?

A favorite method of tax evasion used by corporations is stashing profits overseas in offshore tax havens. Bernie wrote a letter to President Obama highlighting six of the top loopholes corporations use in a plea for the President to close them.

How much are offshore tax havens worth?

There’s an estimated $2.1 trillion in profits held in tax havens, which studies estimate amounts to $200 billion of lost tax revenue each year. In 2008, a U.S. Senate investigation put the figure at $100 billion. That’s three times what our federal government spends on transportation each year. To put that in perspective, the cost of repairing all of the nation’s 47,000 structurally deficient bridges is estimated to be $171 billion.

Watch this video about how the rich hide their money to avoid taxes:

With the newly introduced tax bill taking effect, these businesses have found even more effective ways to get around paying their fair share.

What about ending tax breaks and subsidies for oil, coal, and gas companies?

While the details differ each year, a recent study concludes: “Over the past 15 years, the federal government has provided $68 billion in grants and special tax credits to businesses, with two-thirds of the total going to large corporations.”

Bernie speaks out against all types for corporate welfare, but he finds the government subsidies given to the fossil fuel industry to be particularly egregious. Oil Change International finds that over $21 billion in production and exploration subsidies are given to oil, coal, and gas companies each year. Bernie introduced legislation to end this which would save taxpayers more than $135 billion over ten years.

What else does Bernie suggest we do about it?

In 2015, Bernie issued a report detailing the tax avoidance strategies and “legalized tax fraud” of large companies represented by the lobbying group Business Roundtable. Here’s an editorial he wrote in 2015 about corporate greed.

Bernie introduced the Corporate Tax Dodging Prevention Act, which would prevent corporations from hiding profits in tax havens like Bermuda and the Cayman Islands and would stop giving tax breaks to companies that ship jobs overseas.  In this statement, he lists the specific tax loopholes he intends to close.

Bernie supported the Corporate Tax Fairness Act, which would require U.S. companies to pay taxes on all of their income by ending the deferral of foreign source income. He also co-sponsored the Stop Corporate Inversions Act of 2015 and 2017, which would stop corporations from buying a smaller foreign businesses and moving their tax “domicile” (address for tax purposes) overseas.

You can read more about this on the Climate Change, Energy Policy and Corporate Regulations page.

Bernie believes that we spend far too much money on defense and regularly votes against authorization of the bloated Defense budget. There is waste, overspending, and a lack of accountability in defense spending.  There are military contracts with companies that are engaged in fraud and mismanagement, have high cost overruns, and betray their workers by moving companies overseas. The Defense Department failed its first ever audit, so 26 Senators, including Bernie, are calling for a full audit.

Defense spending is much bigger than we are lead to believe because these numbers do not include the billions of other dollars spent each year that are defense related. Of the $4.7 trillion U.S. budget in 2019, the actual defense spending will be at least $1.1 trillion.

The defense budget can and should be reduced without presenting any risk to our country.

By how much can the military budget be safely reduced?

America’s defense spending is three times more than the next largest spender: China. Even among members of the military, many believe that the budget could be drastically reduced.

To learn more Bernie’s stance on the Military, click here.

An estimated 1 in 9 bridges in the US are considered structurally deficient, and many of the country’s dams are high-hazard. Unfortunately, that doesn’t even scratch the surface of America’s deep infrastructure problems. Bernie believes the U.S. has sacrificed its own needs in favor of spending on foreign wars and other wasteful expenditures. He has proposed an infrastructure plan to spend $1 trillion over five years to rebuild America’s dilapidated roads, water mains, and congested railways.

How will spending $1 trillion help the economy?

The most obvious answer is that it will get the country back to work again, and will get Americans spending money. But beyond that, there are huge added benefits to a properly functioning infrastructure. Investing in infrastructure boosts the economy now and saves money long-term.

One study found that non-residential construction generates $1.92 for each $1 spent in short term economic impact. The long-term impact is even greater — $3.21 for each $1 spent. A separate study found that each dollar spent on infrastructure investments added $3 to GDP growth. Another study estimates that 1.5 million jobs would be created by spending an additional 1 percent of GDP.

In terms of funding a large investment in infrastructure, Bernie has made it clear that the wealthiest Americans, large corporations, and Wall Street must pay their fair share in taxes. He has introduced a number of bills to curb corporate tax dodging which would raise over half of the required revenue.

How many jobs will this create?

Bernie says we need millions of workers to rebuild our crumbling infrastructure.

A five-year, $1 trillion investment to fix our infrastructure would create 13 million good paying jobs for American workers, stimulate our economy, and boost our national productivity.

To learn more about this proposal, read what Bernie has to say about infrastructure.