Bernie Sanders believes the United States should not involve itself in the governments of other countries, even if some U.S. officials do not agree with the other countries’ left-leaning principles. He also believes that free-trade agreements harm the U.S. working class and that the U.S. can provide and receive aid from countries in Latin America even when we may not agree with everything they do.

NAFTA: Bernie’s strong opposition to destructive “free trade” deals began with NAFTA in 1993 because they help multinational corporations at the expense of workers and the environment.

Venezuela and Vermont Deal: Bernie brokered a deal with Venezuela to provide discounted heating oil to low-income families in Vermont.

Nicaragua and the Sandinistas

What happened in Nicaragua?

The Somoza family controlled Nicaragua under a military dictatorship for most of the time between 1936–1979. In 1979, after President Jimmy Carter withdrew support from the Somoza regime, the Sandinistas took power and Daniel Ortega became President.

The Contras were a paramilitary force that started a guerilla war to try to violently remove the leftist Sandinista government from power. They were lead by Coca Cola executive Aldolfo Calero, a good friend of President Ronald Reagan and the CIA. Reagan described the Contras as “the moral equivalent of our Founding Fathers“. The Contras initially funded their efforts with money from cocaine trafficking and Saudi Arabia.

Ronald Reagan supported providing the Contras aid, but he faced substantial pushback in 1982 when Congressional elections brought in a Democratic majority. In 1983, Congress passed the Boland amendment to restrict CIA involvement in Nicaragua.

It stated, “None of the funds provided in this Act may be used by the Central Intelligence Agency or the Department of Defense to furnish military equipment, military training or advice, or other support for military activities, to any group or individual, not part of a country’s armed forces, for the purposes of overthrowing the Government of Nicaragua or provoking a military exchange between Nicaragua and Honduras.”

Because of the Boland amendment, the U.S. government could not give military aid, specifically to Nicaragua. Money provided by Congress was to be openly used and only used to bring an end to the conflict. The agreement put a cap of $24 million on the amount of money the U.S. government could provide to them, halting previous plans to provide them with additional aid.

In April 1985, President Ronald Reagan unveiled a “peace plan“, which would provide money to the Contras for 60 days. However, Reagan declared that no matter what happens, “We’re not going to quit and walk away” from the Contras, implying that the U.S. would continue supporting the Contras in their war if peace was not achieved in those 60 days.

At the time, there was a U.S. trade embargo against Iran because of the Iranian revolution which over threw the U.S-backed Shah Pahlavi of Iran who was installed in 1953 following the CIA-staged coup against Iran’s President Mohammad Mosaddegh.

The Iran trade embargo made selling arms to Iran illegal. Oliver North, John Poindexter, and others orchestrated arms deals through Israel to Iran and used the money from the weapons sales to fund the Contras. This was also illegal because of the restrictions in the Boland amendment. When it was discovered that the Reagan administration engaged in illegal arms deals to the Contras, and that they tried to cover it up by shredding documents, 14 Reagan officials were criminally charged in the Iran-Contra Affair.

Bernie did not believe the U.S. should send arms to the Contras in Nicaragua and objected to the atrocities the Contras were committing in their guerilla war against the Sandinistas.

Why did Bernie get involved in South America?

In an interview, Bernie revealed that he had always been interested in the problems in Latin America due to his reading about the region in high school and college. He did not like the U.S. policy of removing governments they didn’t like through military and armed means, and the fact that many of these interventions benefited major corporations.

Bernie formally protested the U.S. policy of sending arms and munitions to support the Contra militia’s effort to repress the left-wing Sandinista government.

Bernie visited Nicaragua in the summer of 1985 to condemn the war there and came back very influenced by their health care, education, and land reform programs. He became the highest ranking official to visit Nicaragua at the time.

What was Bernie’s view on the Sandinistas?

Bernie was “impressed” by the “intelligence and sincerity” of the Sandinista leaders. He explained that “you do not fight, and lose your family, and get tortured, to go to jail for years to be a hack.”

He writes about his visit to Nicaragua in his book Outsider In The House, “The trip to Nicaragua was a profoundly emotional experience….I was introduced to a crowd of hundreds of thousands who gathered for the anniversary celebration. I will never forget that in the front row of the huge crowd were dozens and dozens of amputees in wheelchairs – young soldiers, many of them in their teens, who had lost their legs in a war foisted on them and financed by the U.S. government.”

Learn more about where Bernie stands on foreign policy issues.

“The essence of NAFTA is that American workers will be forced to compete against desperate and impoverished Mexican workers who earn a minimum wage of 58 cents an hour, and an average manufacturing wage of $2.35 an hour.”

The North American Fair Trade Agreement (NAFTA) is a trilateral trade agreement between Canada, the United States, and Mexico. The law’s purpose was to eliminate barriers to trade and investment between the three countries, mainly by reducing and eliminating tariffs (taxes on imported products). It was signed into law in 1993 and went into effect the following year.

Bernie predicted that NAFTA would eliminate jobs in the United States and would only benefit multinational corporations.

Why were some people for NAFTA?

Supporters of “free” trade deals like NAFTA argue that the increase in trade spurs competition, investment, innovation, and economic growth.

Gary Clyde Hufbauer and Jeffrey J. Schott, experts at the Peterson Institute for International Economics and the authors of NAFTA Revisited: Achievements and Challenges, argued that NAFTA has achieved the intended results:

“NAFTA was designed to promote economic growth by spurring competition in domestic markets and promoting investment from both domestic and foreign sources. It has worked.”

Why were some people against NAFTA?

Many labor, environmental, consumer, and religious groups pushed back against NAFTA, arguing that it would create a “push-to-the-bottom in wages, destroy hundreds of thousands of good U.S. jobs, undermine democratic control of domestic policy-making and threaten health, environmental and food safety standards.”

One of the main concerns was that the deal would undermine national sovereignty. As described by public advocacy group Public Citizen, “NAFTA contained 900 pages of one-size-fits-all rules to which each nation was required to conform all of its domestic laws – regardless of whether voters and their democratically-elected representatives had previously rejected the very same policies”.

What did Bernie say about NAFTA?

Bernie says NAFTA is a failure.

In 1993, Bernie spoke against NAFTA, saying that this fast track agreement with Mexico “will be a disaster for our working people, for our farmers, and for the environment in general.”

Bernie wrote in a 1993 editorial that in his view, “NAFTA will accelerate all of these negative economic trends, and will only benefit the ruling elites of the United States, Mexico, and Canada.”

Bernie put his fellow Representatives on the spot before the NAFTA vote by introducing a bill that if NAFTA were to pass, the members of the House would have to lower their wages to be competitive with politicians in Mexico.

What were the results of NAFTA?

In 2011, while speaking on the Senate floor, Bernie reminded his colleagues that Sen. Mitch McConnell (R-KY) claimed in 1993 that “American firms will not move to Mexico just for lower wages.” Bernie then pointed out how over the next ten years after the passing of NAFTA, Mattel, Lexmark International, Texas Instruments, General Electric, Tyco Electronics, and Levi Strauss laid off a total of 3,176 employees and shifted their production to Mexico.

Recent reports and studies have shown that, because of NAFTA, Americans have lost over 680,000 jobs. One report estimates the job loss as a result of NAFTA is 950,000. A senior economist at EPI stated the following about the disastrous results from NAFTA: “The growing U.S. trade deficit with Mexico has displaced a large number of jobs in the United States and is a significant contributor to the current crisis in U.S. manufacturing, which lost 5.6 million jobs between February 2000 and February 2011.”

This chart shows the nearly $2 trillion trade deficit with Mexico since NAFTA:

This map shows the states affected by the job losses from NAFTA: 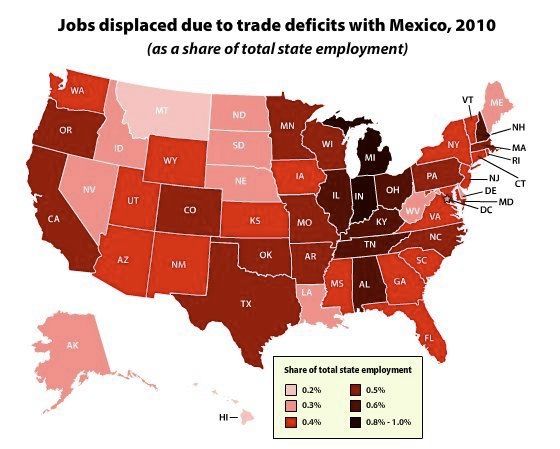 Why has NAFTA been in the news lately?

President Trump made good on a campaign promise to renegotiate NAFTA.  The U.S. withdrew from NAFTA and then negotiated with Mexico to replace it. Canada joined the pact and the result is the United States-Mexico-Canada Agreement (USMCA). Under the USMCA, there continues to be tariff-free trade for most goods. There are some provisions that may benefit American workers when the USMCA is implemented.

Bernie strongly opposed the NAFTA replacement, calling it NAFTA 2.0. He said in a statement,

“In my view, a re-negotiated NAFTA must stop the outsourcing of U.S. jobs, end the destructive race to the bottom, protect the environment, and lower the outrageously high price of prescription drugs. […] Unless strong enforcement mechanisms are written into the text of this agreement, corporations will continue to ship U.S. jobs to Mexico where workers are paid as little as $2 an hour.”

Bernie wanted protections for workers in the USMCA to keep jobs from leaving the U.S. He said, “Do not send this treaty to Congress unless it includes strong and swift enforcement mechanisms to raise the wages of workers and to prevent corporations from outsourcing American jobs to Mexico.”

Learn more about the effects of NAFTA and other free-trade agreements on the Trade and Workers’ Rights issue pages.

What was the deal?

In 2006, Venezuela and Vermont struck a deal that would supply heating oil to low-income Vermont residents at a 40 percent discount, with an additional 108,000 gallons going to homeless shelters for free.

Why did Bernie initiate this deal?

Bernie promised that the program would, “to some degree, make those choices,” between health care, fixing the car, buying medicines or adequate heating, “a little bit easier.” Bernie was excited about the “much-needed relief to thousands of senior citizens and low-income families” that the program provided.

Why was this deal controversial?

Since President George W. Bush and Venezuela’s President, Hugo Chavez, were not on good terms, some critics believed that Chavez was using this cheap oil deal to “one-up” President Bush. Critics also argued that this oil deal was a way to distract U.S. citizens from rising oil prices at the time.

People complained about getting cheaper oil?

Yes, even though it generated goodwill between the United States and Venezuela at a time when relations were strained because the Bush administration helped orchestrate the failed 2002 coup against Chavez. Chavez also called President George W. Bush “the devil” in a 2006 speech at the U.N.

The low income people who received the heating assistance did not complain.

No. The only thing Bernie has helped import from Venezuela is the heating oil for low-income Vermonters.

He never visited Venezuela under Hugo Chavez or Nicolas Maduro. There is no record that Bernie sponsored any amendments, resolutions, motions, or anything else in Congress or anywhere else which praises or condemns Hugo Chavez and his policies.